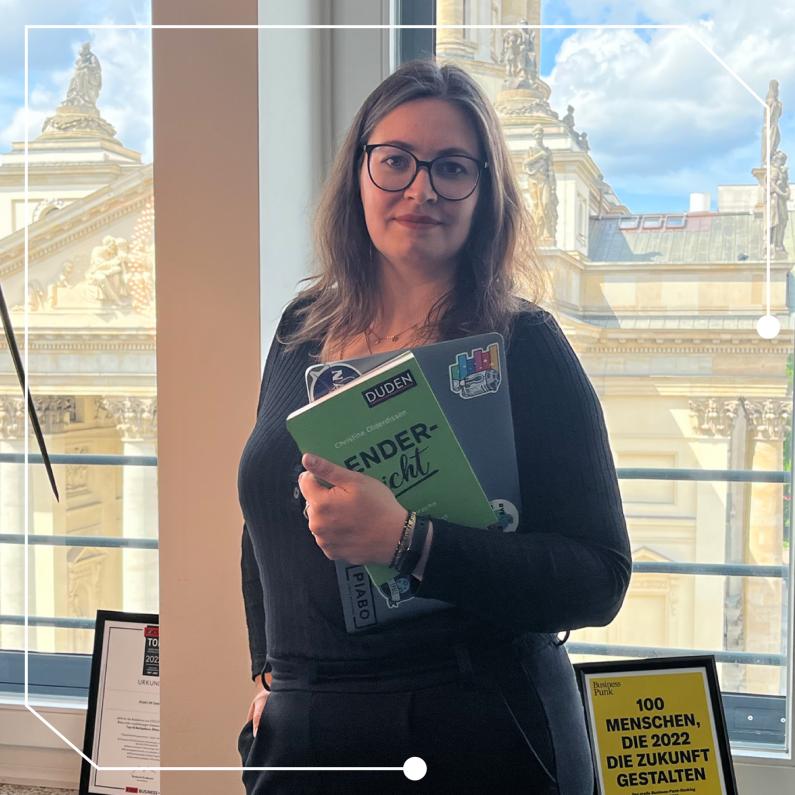 Let's talk about... gender-sensitive language & diversity in the workplace

In our "5 questions with…" section, we regularly introduce you to our PIABO colleagues and share their expertise in communication and PR strategies. Today: Stephanie Stein, Senior Communications Consultant in our new B2B Technology Unit. Among other things, she is known for her commitment to more gender-sensitive language. Together with her we talk about why inclusive language should no longer be voluntary in the year 2022 and gain insights into the PIABO DE&I Group.

1. Stephanie, you are a member of our youngest unit at PIABO. What exactly do you do and how did you join the team?

After being at PIABO for just over two and a half years, it was time for a little internal reorientation, so to speak – something that, thankfully, is very easy to do at PIABO. At the same time, it was important for me to stay in B2B communication, because this is really where both my strengths and my interests come into play. At PIABO, I have advised various tech investors from the very beginning and have been able to learn a lot of new things while putting my knowledge to use. When it became clear that we wanted to give this sector more space by creating its own unit, I was immediately thrilled. Apart from the focus on venture capital (VC), private equity (PE) and M&A communications, the unit also covers SpaceTech, HR-Tech, GovTech and SaaS, and another special field is the B2B metaverse. So we combine a lot of classic B2B topics with the latest developments in the tech industry, just as it is common in the investment sector. Therefore, it's a really good fit for me and I'm looking forward to the next phase of my career.

A while ago I read the phrase "Language is freeware, so you can use it for free, but it's not open source, so you can't just change it." and I thought it was pretty stupid. In general, I love technical comparisons, but this one is woefully misleading. Language is versatile and we have the privilege to shape one of the best developments of language to date: The transfer of the generic masculine into a gender-sensitive version that truly speaks to everyone and not just " meaning others."

Language is an extremely relevant part of our culture and social structure and, as such, influences our perception. At a very early stage, for example, we no longer see a woman in our mind's eye when we speak of "doctor, scientist and CEO". Gender-sensitive language is an elementary building block to change this situation.

In principle, it is understandable for me to be skeptical at first. We live in an information-oriented society whose basic principles include (critical) scrutiny. Unfortunately, this "reluctance" is often based on arguments that are not logical and sometimes hypocritical. I don't even want to talk about the popular statement "It didn't exist in the past", because that has never been a good argument in any context. As with the question: "Aren't there more important problems in the world?", the other side of the conversation seldom claims to be engaged in a genuine discussion - which then makes it difficult to argue. However, the goal of such a discussion is to make the critics decide for themselves that it is not wrong to think about it. In this case, however, current studies by international scientists are very helpful in strengthening one's own arguments.

Where I often find myself at a loss for words, however, is when someone tells me that speaking or writing in a gender-sensitive way would complicate the language or even exclude people. Especially the latter is often used by people who are not interested in inclusion and who now use e.g. visually impaired people as an excuse to continue using the generic masculine. Still, there is some truth to this, because so far none of the solutions is perfect. The asterisk, for example, is more annoying than the colon when used with screen readers, while the colon is harder to see in text, creating additional barriers. In the meantime, however, there are finally a lot of people working on this, so I hope that we will soon have a solution that is not only gender-sensitive but also truly inclusive.

And as far as its implementation is concerned: Just do it. Often, those who want to do something better always expect it to be perfect, whether it's climate protection or equal rights. But every step is important. It's all about trying things out and practising - if it's not perfect, that's okay, too. Anything is better than not trying to make a difference at all. After all, we're here to learn and always improve.

4. Gender-sensitive language is just one part of Diversity, Equity and Inclusion. As part of our PIABO DE&I group, you are also committed to diversity in the workplace. Which specific measures has PIABO implemented with regard to this, and which are planned?

In addition to our gender-sensitive language guideline, which we implemented early last year, our partnership with Employers for Equality is an important milestone. Thanks to the carefully curated training program by Isabelle Hoyer and her team, we have access to seminars, workshops and masterclasses by leading experts in gender equality, diversity and inclusion. As a result, we continuously receive practical impulses that we can apply directly. In addition, we exchange experiences with other committed member companies, such as Bosch, Deloitte, DB Schenker and the Haufe Group.

The group's work is of course ongoing, and we try to accommodate all interest groups. For example, we are currently working on a recommendation for the use of pronouns in email signatures and are reviewing our job postings to ensure that they are worded inclusively. By the way, the DE&I group is handled by our COO Daniela Harzer, who is always involved in the process.

5. Last question: If you had three wishes, what would you wish for in terms of diversity and gender-equitable language?

More open mindedness, insight, and less "whataboutism" on the issues of DE&I - and also for companies, as well as individuals, to start listening more to the people who are actually affected by exclusions, rather than making up their own minds as they go along. Please see Düzen Tekkal, Luisa L’Audace, Lori Mackenzie, Raul Krauthausen, Tupoka Ogette, Sina Schmeiter, Dr. des. Aylin Karabulut, Mirja Siegl, Annahita Esmailzadeh, and Schuyler Bailar. All of them have been doing valuable educational work, in some cases for years, and their voices should be heard more often.