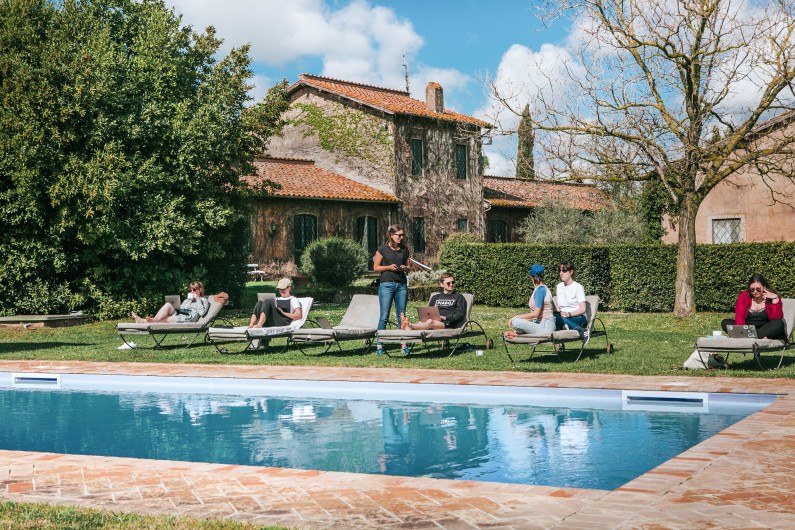 Workation in Rome – An Annotated Report

"When someone goes on a journey, they can tell a story", the German poet Matthias Claudius wrote more than 200 years ago. 30 PIABOs – split into two groups – went on a journey, a workation to be precise, in March and April of this year. The destination? A beautiful Umbrian farmhouse called Casale del Gallo in the Southeast of the Eternal City: Rome. And we have many stories to tell about this workation. So many, in fact, that PIABO Aljoscha Röllecke wrote a whole workation report, which includes anecdotes from travelling, a unit founding party, conferences by the pool and a look at returning to Germany.

For almost all workation participants, the entire journey took place via rail – first by train office to Munich and from there by night train through the Alps to Rome. For us, this climate-friendly way of travelling was the perfect start to the workation, as we were able to share our anticipation and expectations for the coming two weeks and get to know each other better. In addition, we also got a new sense of distances, which after all have become less and less tangible in the past decades due to flights.

When we arrived in Rome at noon the next day we were tired but happy. After a transfer to the Casale del Gallo, we were overwhelmed by our surroundings. Our host Gulio gave us a tour of the whole estate and the different houses. In a meeting reminiscent of flat shares, we then determined important points, such as who sleeps where and organised the grocery shopping for the next few days. It became clear that very first day that although we were work colleagues, we also wanted to get to know each other beyond that. After two years of pandemic life, we all wanted a break from our routines and some time to take a breather together.

We used Sunday to settle into our holiday home so that the first week of work could get underway without any problems. By that evening, everyone knew roughly where the wifi was best, how the kitchen stove worked, and how to bribe the house cat. We explored our surroundings and made plans for the next few days. We also used our free time to go to the nearby ocean and to explore Rome. In summary, arriving on the weekend was the perfect start to our workation. 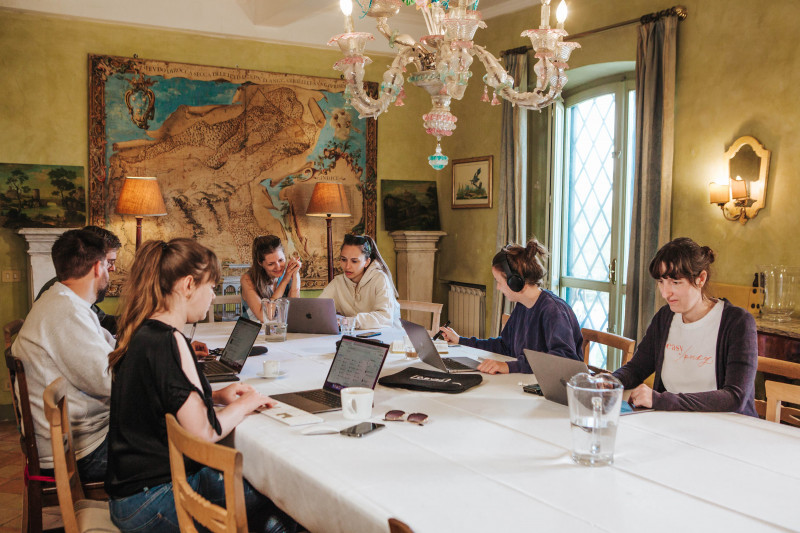 "The Pool Is the New Conference Room"

Due to the size of the property paired with a good range of wifi, we had the opportunity to work outside the villa as well. The pool was converted into a conference room for brainstorming sessions and internal exchanges. Some discussions and 1:1s even took the form of a joint walk through the vineyards of the neighbouring Tenuta di Fiorano winery. Even during working hours, we always took care of each other, which further strengthened our sense of community. For example, we had one or more people prepare lunch for everyone (thinking about that great couscous salad!) or start the day by making espresso for the whole team in the 16-cup (!) Bialletti coffee machine. “Answering emails by the pool, video calls with real olive grove backgrounds, and lunch break walks through Italian vineyards – we couldn't have found a better workation location," Julia Tenner recalls.

Since both workation groups were made up of PIABOs from many different units with different positions, we had in some cases not even met each other in our day-to-day work before or had at least not yet carried out any projects together. Because of this, talking to each other, exchanging ideas and getting to know each other was so beneficial. At points we even helped each other out with fresh insights during spontaneous brainstorming sessions. "The workation was a great opportunity to get to know my colleagues away from the daily work routine and to strengthen the team structure," says Fabian Zeitler, summing up the experience.

After-Work Between Cooking Sessions, Exploring the City and a Unit Founding Party

Similar to a shared apartment, all participants came together again and again after work in various constellations, e.g. to talk by the fireplace or to swim a few laps in the in-house pool. Joint cooking sessions and subsequent dinners always lightened the mood, encouraged the exchange of recipes and were often the start of entertaining evenings. As a special highlight, the unit founding party of Julia and Fabian on the first weekend of our stay stands out in my mind. All in all, the workation was a great opportunity to get to know colleagues from different units on a personal level. For all of us, the shared experiences both in Italy and on our journey there and back were definitely among the highlights of the workation.

On our second Sunday in Italy, we set out together to explore Rome. It was sunny and very windy, and after visiting the Spanish Steps, we divided into smaller groups and ventured towards the Colosseum, the Roman Forum and the Vatican, only stopping for great food and strong espresso along the way. For many of us it was our first trip to Rome, so we were also able to benefit culturally from the workation. Did you know that it sometimes hails in Rome?! Neither did we. Good that we found shelter in the narrow streets. For me, Rome’s architecture was another highlight: to see how the Romans created buildings like the Colosseum some 2,000 years ago is breathtaking.

Even after returning to Germany, our workation groups continued their personal exchange. In addition to a pizza revival party for the first group, many colleagues also met again in private to further intensify the friendships that had developed. "In our day-to-day work, the workation not only brought the team closer together, but also led to better results throughout the agency. We have noticed a real boost in motivation and creativity. No brainstorming session, no Christmas party has achieved such long-term measurable results," says Andreas Krönke, Executive Unit Director and participant in the workation.

"So I would take my stick and hat and choose to travel", Matthias Claudius' saying continues. We also chose travelling and were thrilled with what started as an after-work idea of Lara Schermer, Hellen Hohoff and Ann-Kathrin Marggraf. Our workation was the perfect combination of work and leisure. Working where others go on vacation: the concept, as we imagined it, works. “We were able to broaden our horizons with a view of the horizon," says a delighted Ann-Kathrin Marggraf. Our first workation has shown us that this is a great concept that strengthens the whole PIABO team in the long term. We are therefore looking forward to future workations – where will we travel to next?