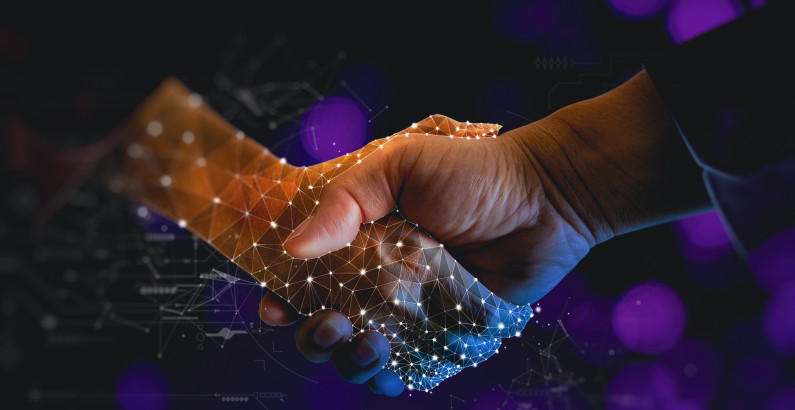 We are on the threshold of the next stage of the internet: Web3. Its central promise also includes a decentralized metaverse. While the term has been making the rounds in blockchain circles for some time, it has also recently become mainstream, with the rebranding of Facebook as "Meta." But what exactly is behind the "metaverse" – and what influence will it have on customer loyalty?

First things first; there is not yet a universally agreed definition of the "metaverse." As with any new technology, there are different and sometimes contradictory visions of how the metaverse should be designed. These approaches can be roughly summarized as corporate or community-based; in other words, centralized versus decentralized. The term comes from the 1992 cyberpunk novel "Snow Crash" by Neal Stephenson. In it, the metaverse describes the further development of the internet: a virtual space in which people interact with each other with the help of avatars.

Nearly 30 years after "Snow Crash," venture capitalist and essayist Matthew Ball outlined his idea of the metaverse in a widely quoted essay titled, "The Metaverse: What it is, Where to Find it, and Who Will Build It."

According to Ball, the metaverse should be…

… persistent – that is, it never "resets," "pauses," or "terminates," but simply continues indefinitely.

… synchronous and live – even though pre-planned and self-contained events will take place, the metaverse will be a living experience that exists consistently for everyone and in real time.

... without limit in the number of simultaneous users, while at the same time giving all users a unique sense of "presence" – anyone and everyone can be part of the metaverse and participate in a particular event, place, or activity together, at the same time, and with individual agency.

... a fully-functioning economy – individuals and businesses should be able to create, own, invest, sell, and be rewarded for creating a wide range of "work" that is recognized by others.

… an experience that spans both the digital and physical worlds, private and public networks, and open and closed platforms.

… unprecedented in interoperability of data, digital items/assets, content, etc. [...] – your Counter-Strike weapon skin could also be used to decorate a weapon in Fortnite, for example, or given to a friend on/via Facebook. [...]

... populated by "content" and "experiences" created [...] by a variety of contributors. Of these, some may be independent individuals, while others may be informally organized groups or commercially oriented companies.

Among the prominent recipients of Ball's essay is Meta CEO Mark Zuckerberg. Zuckerberg described Ball's idea of the metaverse as "great," but also expressed doubts about the implementation of universal interoperability that Ball is calling for.

The metaverse is not a second “Second Life”

Now, one could argue that with "Second Life," a kind of metaverse was already launched almost 20 years ago. In fact, the world of Second Life already fulfills some aspects that make up today's understanding of the metaverse: users create virtual avatars and have the possibility to meet and create their own content. Communication, trading (including in their own currency), playing, and working have already been possible in Second Life for years, at least to a certain extent.

However, Second Life does not support virtual reality – which means that this version of the metaverse is missing a central component – namely, immersion. Moreover, Second Life is not a decentrally managed metaverse, but is controlled by its creators - the company, Linden Lab. Thus, this clashes with the idea of those who see the Metaverse as a killer app for the decentralized Web3.

With technological advancements of the past decade and the growing proliferation of VR headsets, we have come a significant step closer to a truly immersive metaverse. Immersion not only grows with the quality of headsets and graphics engines, but also takes on a new dimension through the use of blockchain technology: the certainty that my avatar/item/property etc. really belongs to me. Non-fungible tokens (NFT) play a crucial role here.

NFTs: Only for tech nerds?

Many people associate NFTs primarily with overpriced avatars that adorn more and more social media profiles as pixelated punks or apathetic apes. However, this does not do justice to the potential of NFTs, because they can be much more than overpriced status symbols of Twitter users and the like.

Non-fungible tokens already bear their most important attribute in their name; they are crypto tokens that, unlike cash or "classic" cryptocurrencies, are not mutually interchangeable. Instead, they represent a kind of digital certificate of ownership that is linked to a unique value. This value can be a (digital) work of art, a digital trading card, a piece of music, a tweet, or a piece of clothing for an avatar with which one undertakes forays through virtual worlds whose properties also exist as NFTs – there are no limits to the imagination.

There are also tangible industrial use cases for NFTs. For example, the token standard can be implemented in supply chains to enable seamless tracking of goods. Case in point, Ernst & Young (EY) announced in May 2021 that the Italian brewery Birra Perroni will be able to trace batches of beer using a blockchain-based solution from EY as a NFT.

NFTs and the metaverse also offer companies entirely new possibilities – and this also applies in terms of customer loyalty and user experience.

Communication in the metaverse: New ways for customer retention

Back in the heyday of Second Life, there were already numerous companies that had created a virtual presence. However, a big breakthrough failed to materialize at the time. There are good reasons to believe that modern metaverse approaches have a better chance of success. Technological advances such as augmented reality (AR) are increasingly blurring the boundaries between physical and virtual space.

In addition to technological advances, there is an ever-growing generation of "digital natives." In addition, the Covid-19 pandemic has further advanced the digitalization of many areas of life. It would only be a small step from the Zoom meeting to the virtual conference room (complete with participants), fully modeled in 3D.

Even if "the" metaverse is still in its infancy, it is remarkable to see the verve with which numerous companies have already jumped on the bandwagon. In the blockchain-based metaverse The Sandbox alone, global brands such as Gucci, PwC, Warner Music, and Square Enix are already romping around. They have all acquired virtual properties in the Sandbox metaverse and are now exploring new ways to interact with customers. Last year, for example, Adidas launched an NFT collection that gave shoppers not only a virtual avatar but also claims to "real" items. NFT holders will continue to benefit from exclusive offers in the future.

By working with creative and development teams from the metaverse, companies can ensure that their messages generate the greatest possible impact. Adidas competitor Nike, for example, is also getting involved in the metaverse. In December, the company announced the purchase of NFT incubator RTFKT (pronounced "Artifact"). This was accompanied by the launch of a digital sneaker collection that allows avatars to sneak through the metaverse on stylish soles. The cooperation offers an example of virtual product placement - a new tool from the customer loyalty toolbox that the metaverse brings with it.

Both Adidas and Nike say they do not want to leave it at one-off promotions. The two companies plan to use the metaverse for customer loyalty in the long-term by building their own ecosystems that dare to straddle the divide between meatspace and cyberspace.

Needless to say, the metaverse space also provides fertile ground for innovative startups. The Berlin-based company NeXR, for example, builds bridges between the physical and virtual worlds. Among other things, the start-up has developed a body scanner for the retail trade that allows customers to create a realistic avatar. This avatar can then be used for virtual fittings. In addition, NeXR offers a solution for virtual events by combining motion capturing and green screen.

But the Metaverse is about more than passively attending a digital conference or concert. It's about creating experiences that would not be possible in the analog world. For example, virtual house tours on the other side of the world, exclusive customer events that are only accessible to NFT owners, or virtual showrooms where customers can view products and exchange ideas. Gamification elements can be used to further increase customer loyalty: "You've taken 10,000 steps with your NFT sneaker in your pocket? Great, here's a voucher for your next offline shoe purchase!"

Another aspect of the metaverse that is often neglected is its inclusive potential. It can, for example, open up new opportunities for people with limited mobility to participate in society and help companies tap into new customer groups.

The metaverse is still in its infancy. But there are already many indicators that it is here to stay. What form it will take in the future is unknown - and will be decided not least by the users themselves. On the one hand, it can be assumed that Meta will become one of the biggest players in the metaverse due to its enormous user base. The masses of user data that the group already has at its disposal will be joined by movement and eye-tracking data.

On the other hand, there are decentralized Web3 projects in which some courageous companies are already moving today. Ideally, we will end up with a large number of different metaverses that are interoperable. Companies should position themselves accordingly and not focus prematurely on a single solution.